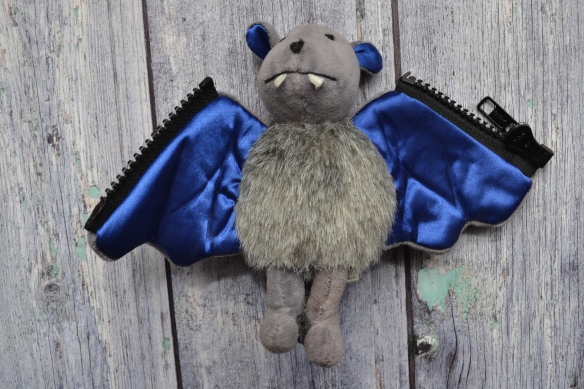 We started writing this blog over two years ago, to record and encourage our clutter-clearing efforts. We knew it would never be easy, but did we ever imagine we’d still be Drowning in Stuff all this time later? Carrying two bags of outgoing stuff, I recently bumped into a neighbour who remarked “oh, you’re still doing that?” Little did she know how much that still needed doing!

I wouldn’t regard myself as a hoarder, but I’m finding it ridiculously hard to de-clutter my home. I also realise that any minimalist would view me in the same light as people who’ve saved all the Sunday supplements since 1973, just in case that interesting article comes in handy. Why is it so hard to get rid of this stuff? I’m starting to think it’s about letting go… 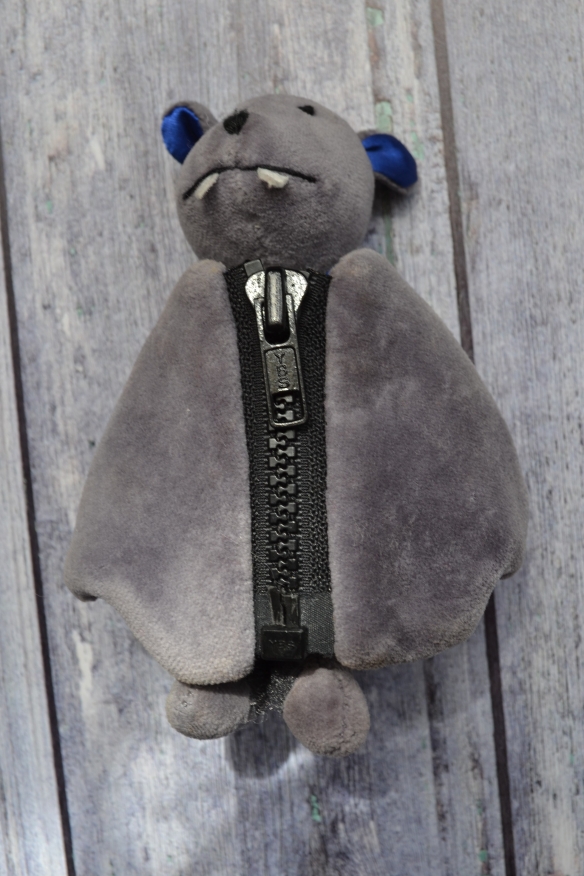 This little chap used to belong to my daughter. As you can see, he’s quite cute, but he was never a family favourite. I’m currently selling stuff on eBay to raise money to go on a wildlife holiday with my now grown-up daughter, so it seemed apt to add him to my listings. As I took the photos, I discovered this tag: 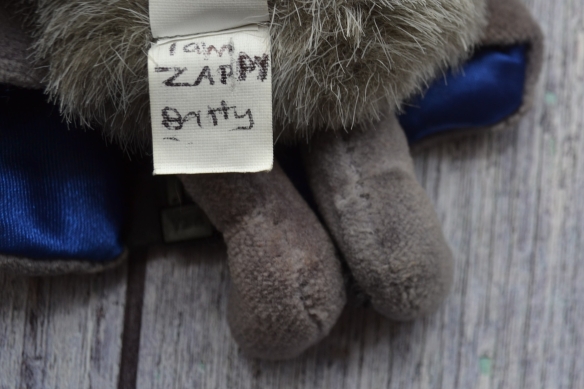 Suddenly, I felt that bit more attached to the little fella. My daughter had given him a name. How could I possibly give away Zappy Batty? Before he was just a sweet soft toy, now he was practically one of the family! Somehow, I continued the listing and eventually sold Zappy. As I tenderly wrapped & popped him in a jiffy bag, my heart ached a little. My small daughter had named this bat and I was cruelly evicting him from our home.

Give a bat a name and it becomes twice as hard to give away!

This made me realise I have attached emotional importance to so much of the stuff which fills my house… things which my children would chuck in the bin without a second thought, I preserve and cherish. Souvenirs of their childhood.

And it goes way beyond that. I also hang on to stuff which I might refer back to (but don’t) and things that might prove useful (but won’t.) I guess that’s why it’s easier to let someone else clear stuff away- they simply don’t have the same personal attachment to your things.

That’s why I’ve found it so hard over the years. I’ve invested a lot of energy in not getting rid of this stuff, in rearranging it, storing it, trying to manage it… when all I needed to do is step back and look at it from a different perspective. Did I really want to keep Zappy Batty? No, I didn’t even like him that much. What I want is a wildlife holiday with my daughter, creating new memories. I’m now £4.20 closer to that goal, and hopefully a little closer to getting rid of a whole lot more stuff which I really don’t love or need. Here’s hoping.

PS: Talking to my daughter on the phone I told her how sad I’d felt, giving away her childhood friend. She laughed and said she hadn’t even chosen the name for her bat. It had been the toy manufacturer’s choice; there were thousands of Zappy Battys!

Anyone want to buy two bats? 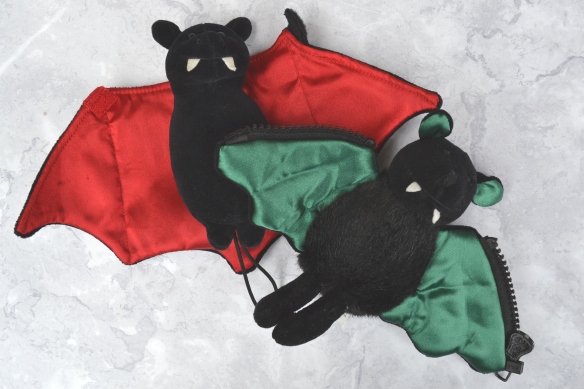 This post will take me 23 minutes .How you ask can I be so precise and so quick when previous posts have given the impression this blogging lark takes hours if not weeks of effort before a post sees the light of the day. Simples as they say. Last week my fellow stuffoholic gave me the self help book she reviewed and it is now clear to me (it was before but I was in denial) that this blog is as often a way of procrastinatig as it is an incentive to get stuff done so I have something to write about.

I faff around deciding on the perfect title then the perfect pictiure or three. Today a perfect example of how life conspires to make a job taking longer. the first picture chosen proved to be wrong format an excuse to delay but no today simply chose the next image. I liked it came from a post entitled “No Fear of Time” . Indeed fitting as what I took away from the book was the reminder all too often a job takes as long as we give it because we want to do something else even less. The time I spend on this blog is time I’m not spending on emptying the filing cabinet of old stuff to make room for new stuff which would mean I could find things and enjoy working at my desk without fear of something sliding off.

At his point there would more faffing and time wasting as I take picture of desk connect, phone to laptop , upload on third attempt , resize …. Not today. Today I will find something already loaded which is good enough . Just in time before timer goes ping . I leave you with the

Thought for the day

“You don’t need it to be poerfect you need to get it done !!” 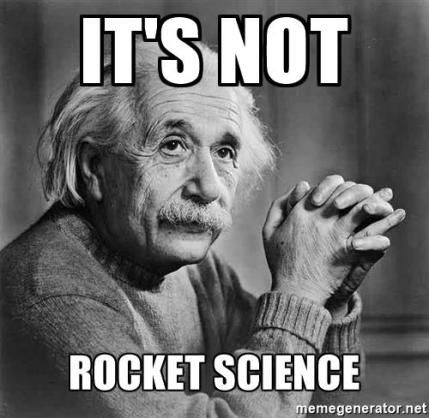 Apologies dear reader (and fellow stuffoholic) for spelling , grammer and other stuff but I had to get it fdone !! 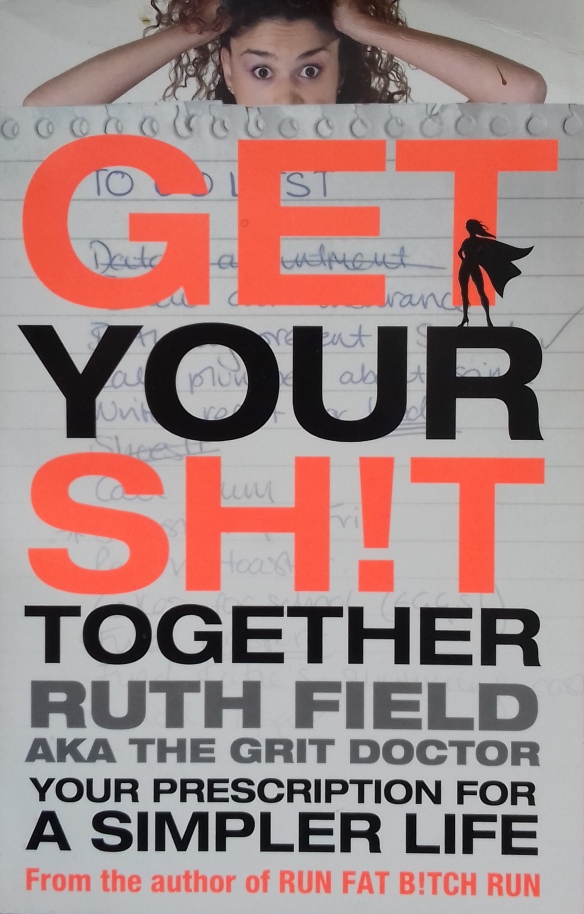 It has taken me two weeks to write this blog. I’m a reluctant blogger and I’m starting to realise that writing about decluttering has simply become another way to avoid decluttering.

My progress over the past two years has been steady, but slow. Way too slow. So today I pulled this book from my groaning bookshelves. Like most self help books I own, there was a bookmark around chapter two. Which possibly explains why my shit is most definitely not together.

Anyhow, I’m not going to ramble on about my failings. I’ve zoomed through Get Your Shit Together and these are the bits that struck a chord for me…

So, the blog’s written. I’m off to get my shit together, one shelf at a time.

Who wants this book next?

We would love to hear from you. Leave comments, tweet or e-mail us at experts@drowninginstuff.com