“But when we really delve into the reasons for why we can’t let something go, there are only two: an attachment to the past or a fear for the future.” ― Marie Kondo

Writing this blog never easy but this month the reward/effort ratio such that blog has stayed written in my head and no enthusiasm for ensuring that the thought finds it way to a virtual page. Why? Doesn’t matter. Today a new day , well actually tomorrow but you get the gist. My fellow stuffoholic has a wry sense of humour so despite a only if you really really need or love it stuff buying ban couldn’t resist getting me THE book when spotted for a mere 50p in a far flung charity shop. There are many books out there looking for a home but how could a stuffoholic have not added KonMari ‘s seminal work to their collection( even if they know they will have to let it free when it has tarried here long enough)   I was sceptical how someone who had achieved a global empire from tidying would resonate with this self confessed drowning in stuff non minimalist.  Surprised to learn that the Tidy guru wasn’t so different, loved books and had struggled with systems and a sense of never ever going to get it done too.

Inspired I decided to tackle my desk, an old foe with which you will be familiar if you’ve chanced by this blog before. Past efforts have been successful in that the problem with desk is now paper that needs to be dealt with. Easy peasy after all this practice developing my tidying muscles. But it wasn’t .  The easy stuff had already been filed or recycled. No these bits of paper were the one’s I’d picked up many times, put back and thought I’ll deal with that later. I thought my fellow stuffoholic would be sympathetic to my dilemma, agree that this was a seriously difficult exercise and would need tea. Quite the opposite, they said it was simple. I said show me how and they picked up pile and headed for recycling bin. Nooooo………………! That’s cheating , what if my passport is in that pile. It isn’t they said . But .. I said plaintively. How about we do this one piece at a time. And to cut this tale short . The stuffoholics paper dealing method was invented. Ta dah! 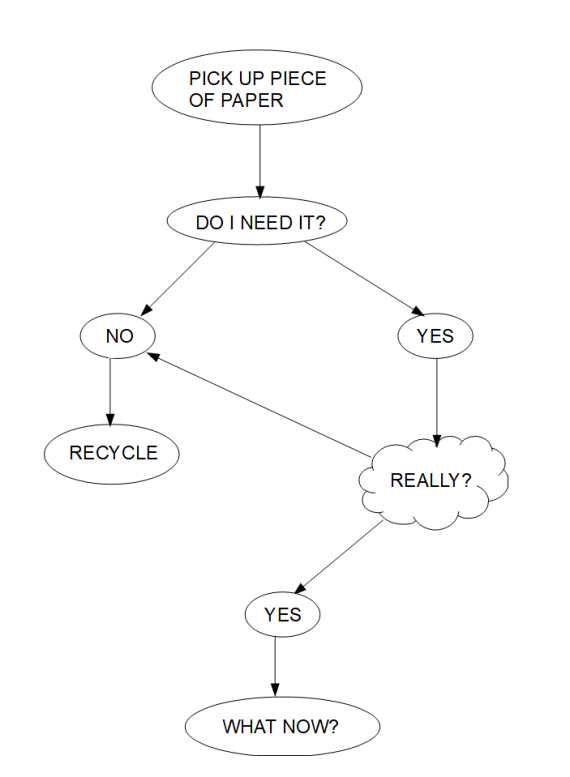 It doesn’t file the paper for you but there’s now only a trickle making it through to What Now. What now? Well in best cliff hanger tradition the answer to that question will require you to return another day. May your paper mountains be scaled or turn out to be hills.